According to WebMd, it is perfectly safe and even advisable to maintain an exercise program while pregnant.  Evidence suggests working out relieves stress, improves posture and reduces the chances of gestational diabetes. If you were physically active before getting pregnant, you can certainly maintain a workout regime while pregnant.  You will probably have to scale back a bit, but I’m always amazed at how strong and resilient pregnant women can be.  Here are a few feats that amaze me:

Personally, I worked out during both my pregnancies and was on my way to the gym with my first when my water broke.  I’ve also trained countless women during their pregnancies and only one (with twins) ended up on bed rest.  Please check with your doctor, especially if you’re new to exercise, but otherwise feel free to break a sweat, just modify your intensity.

Now that we’ve established it’s okay to exercise while pregnant, there are still a few precautions:

One of the areas that give woman who exercise during pregnancy the most problems is their core.  Positions can get uncomfortable as your belly grows and you can get pelvic ligament strains and pains.  Here’s a view of visual of the main abdominal muscles: 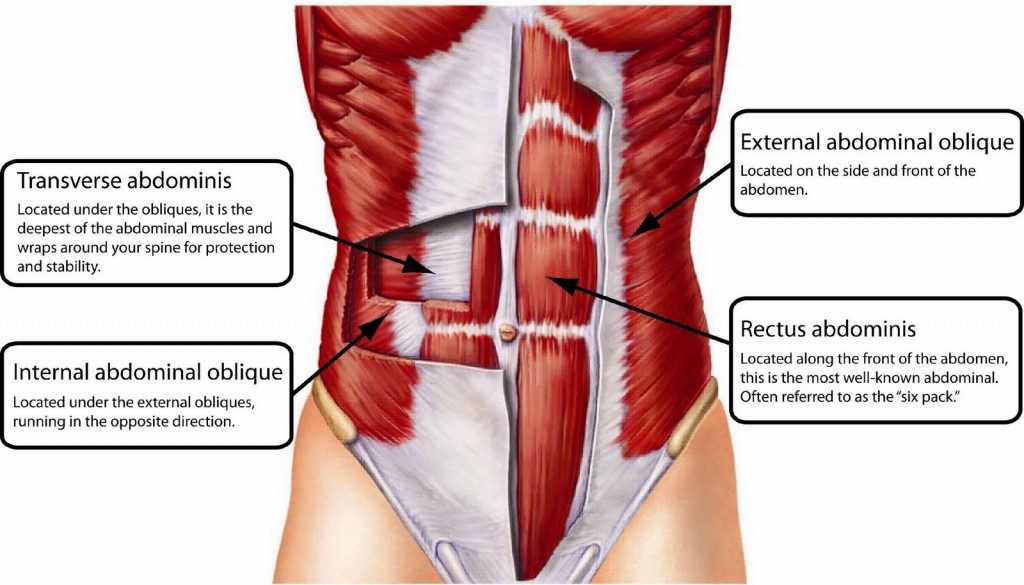 During pregnancy, the internal and external obliques generally do okay.  The rectus abdominis is the most superficial ab muscle (the “six pack”) and will generally be stretched out during pregnancy.  The transverse abdominis is your core’s built-in girdle.  Unfortunately, pregnancy will stretch out this muscle and it is the most important muscle for maintaining core stability. The exercises listed below are generally safe, effective and comfortable. The videos are all about 30 seconds or less. If anything feels uncomfortable, please discontinue.  I am modeling the exercises for the first and second trimester and my client Deirdre, who happens to be 34 weeks pregnant with her second child, is demonstrating the exercises for the third trimester.

You don’t have to do each exercise every time you workout and you can certainly do the third trimester exercises while in your first or second trimester.  I would pick three or four to do during each workout.  Try to pick exercises that put you in different positions.  For example:

Set 1: Plank or Opposite Arm Leg Extension; Rotation with Tubing; Seated Side Bend

Set 2: Down Dog to Plank or Opposite Arm/Leg Extension; Seated Bicycle; Overhead Reach